The International Institute for Environment and Development (IIED) in partnership with Aide et Action published a new report to highlight the alarming and yet little recognized impact of climate change on population displacement and human trafficking.

The increase in natural disasters, the rise in food insecurity and the decline in purchasing power caused by climate change are affecting vulnerable populations more severely and brutally. These families, whose survival depends mainly on natural resources, have no choice but to adopt survival strategies, to limit or even cut out non-vital expenditures such as education or health, and to leave their home villages in the hope of finding a better life. But such forced displacement exposes people to terrible dangers and exacerbates their vulnerability to trafficking and the worst human rights violations.

Climate change as a factor in human trafficking

These violations (exploitation, forced labour, and human trafficking) will intensify as climate change is expected to worsen. Yet no one today, neither international organisations nor politicians, seem to recognise this danger, nor take adequate measures to address it. In this context, the report « Climate change, migration and vulnerability to trafficking » published today by the International Institute for Environment and Development (IIED) and Aide et Action is the first concrete empirical evidence of the link between climate change, human trafficking and slavery. The quantitative and qualitative study analyses the behaviour and habits of 420 disadvantaged households from two regions: Kendrapara district (Odisha), which is primarily wealthy and prosperous, with a predominantly literate population, but which has suffered from numerous natural disasters, and Palamu district (Jharkhand), which is less developed and more exposed to slow-onset events. In both regions, the conclusions are clear: the slow and brutal consequences of climate change (increase in natural disasters, soil erosion, decrease in natural resources, food insecurity and famine, decrease in water resources, etc.) have deprived the most vulnerable populations of decent living conditions and minimum resources. Deprived of social protection that could alleviate the economic and social blow, the most vulnerable families are forced to move and are massively victims of human trafficking. Climate change is therefore the new driver of migration and human trafficking, the report concludes.

« I am delighted with the production of this report because the increase in risks and trafficking linked to climate change is now the priority of my mandate. »,  said Siobhán Mullally, UN Special Rapporteur on human trafficking, especially of women and children. « The two examples analysed in this study, one in a region plagued by climatic disasters, the other exposed to slower and less visible phenomena, show the impacts of climate change on the most vulnerable populations  in an empirical and concrete way. In fact, they show the extent to which they exacerbate their vulnerability to human trafficking. Women in particular, due to gender inequalities and lack of access to resources, are more at risk.  »

The report encourages the international community to recognise the impact of climate change on forced displacement and distress migration, stresses the need for a coordinated and inclusive approach to this new threat, and calls for the implementation of preventive measures to move and resettle people before any climate emergency strikes.

To encourage governments to act, the report also proposes:

Books to learn and escape

Libraries and books are a source of learning and escape for the children of GB Road, born to sex workers. Far from the nightmare of their daily lives, they improve their skills and discover that another world is possible through education. Meet Lalit, who in a few months at the reception centre opened by Aide et Action and Prayas in New Delhi, was able to learn to read.

A project conducted in partnership with the Prayas association in India enables Aide et Action to support and accompany women sex workers living in the heart of New Delhi. Reduced to the status of slaves, deprived of all rights, they are gradually regaining hope and confidence thanks to a reception and support centre that takes care of their children.

In Salem, AEA’s Enlight project is working with 220 girls who are infected/affected by HIV/AIDS. The project is building their confidence and preventing them from dropping out of school. Many of them are now pursuing higher education.

COVID-19: women as agents of change for education

"I have been working for Aide et Action for more than 2 years but because of the pandemic, I had never been able to go and meet the populations we support. I was more than impatient that last December, when I finally had the opportunity to go to Benin and Togo. Two countries that I had not heard much about but that I am not ready to forget today.

“I was shocked by the fate of the girls but especially by their determination to change things”.

"I have been working for Aide et Action for more than 2 years but because of the pandemic, I had never been able to go and meet the populations we support. I was more than impatient that last December, when I finally had the opportunity to go to Benin and Togo. Two countries that I had not heard much about but that I am not ready to forget today.

To enable women to become autonomous and take decisions within their households, Aide et Action promotes their emancipation by offering them technical training and psycho-social support. More than 400 women will be trained in Burkina Faso within the framework of the Forself project, which is now being carried out with the support of the Organisation Internationale de la Francophonie.

School closures and long months of lockdown imposed by COVID-19 have resulted in significant learning losses for all children. Children from the most vulnerable and marginalized communities have been more severely affected than others, says the new report published by Aide et Action on the occasion of the International Day of Education.

Insecurity and terrorism: sacrificing the right to education

Growing insecurity in Burkina Faso and Mali has led to the closure of hundreds of schools, especially in areas controlled by terrorists, and a drop in school attendance in other regions. The future of thousands of children, now deprived of their right to education, is under threat. Faced with this situation, Aide et Action is adapting its programmes to guarantee access for all, both girls and boys, to education as a source of salvation and resilience.

Amid great risk, painful narratives and more, we have a reason to smile and cherish. As part of the ‘Girls Who Code’ initiative, the girl children of domestic workers in Pune are receiving training on computer coding. The training is not only helping them improve their creative, logical and problem-solving skills but also their academic skills, shares Madhu Panday, Program Officer, AEAI South Asia. 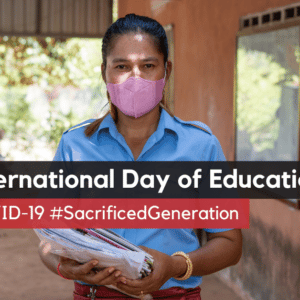 Witness reports: teachers are worried about the impact of COVID on the future of young children

Kindergarten is still poorly developed in Cambodia, especially in rural and marginalized areas. For several years, Aide et Action and partners have been promoting pre-school care from the earliest age in dedicated centres. But the COVID-19 pandemic has led to an almost instant closure of these centres. For these vulnerable children consequences will be heavy and long-lasting, insists Aide et Action on the occasion of the International Day of Education (24 January).